Harley-Davidson, Inc. (H-D), or Harley, is an American motorcycle manufacturer, founded in Milwaukee, Wisconsin in 1903.

In 1901, 20-year-old William S. Harley drew up plans for a small engine with a displacement of 7.07 cubic inches (116 cc³) and four-inch (102 mm) flywheels The engine was designed for use in a regular pedal-bicycle frame. Over the next two years, Harley and his childhood friend Aruthur Davidson worked on their motor-bicycle using the northside Milwaukee machine shop at the home of their friend, Henry Melk. It was finished in 1903 with the help of Arthur's brother, Walter Davidson. Upon testing their power-cycle, Harley and the Davidson brothers found it unable to climb the hills around Milwaukee without pedal assistance. They quickly wrote off their first motor-bicycle as a valuable learning experiment.

Work immediately began on a new and improved second-generation machine. This first "real" Harley-Davidson motorcycle had a bigger engine of 24.74 cubic inches (405 cc³) with 9.75 inches (25 cm) flywheels weighing 28 lb (13 kg). The machine's advanced loop-frame pattern was similar to the 1903 Milwaukee Merkel motorcycle (designed by Joseph Merkel, later of Flying Merkel fame). The bigger engine and loop-frame design took it out of the motorized bicycle category and marked the path to future motorcycle designs. The boys also received help with their bigger engine from outboard motor pioneer Ole Evinrude, who was then building gas engines of his own design for automotive use on Milwaukee's Lake Street. 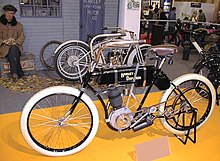 The prototype of the new loop-frame Harley-Davidson was assembled in a 10 ft × 15 ft (3.0 m × 4.6 m) shed in the Davidson family backyard. Most of the major parts, however, were made elsewhere, including some probably fabricated at the West Milwaukee railshops where oldest brother William A. Davidson was then toolroom foreman. This prototype machine was functional by September 8, 1904, when it competed in a Milwaukee motorcycle race held at State Fair Park. It was ridden by Edward Hildebrand and placed fourth. This is the first documented appearance of a Harley-Davidson motorcycle in the historical record.

In January 1905, small advertisements were placed in the Automobile and Cycle Trade Journal offering bare Harley-Davidson engines to the do-it-yourself trade. By April, complete motorcycles were in production on a very limited basis. That year, the first Harley-Davidson dealer, Carl H. Lang of Chicago, sold three bikes from the five built in the Davidson backyard shed. Years later the original shed was taken to the Juneau Avenue factory where it would stand for many decades as a tribute to the Motor Company's humble origins until it was accidentally destroyed by contractors cleaning the factory yard in the early 1970s.

In 1906, Harley and the Davidson brothers built their first factory on Chestnut Street (later Juneau Avenue),[12] at the current location of Harley-Davidson's corporate headquarters. The first Juneau Avenue plant was a 40 ft × 60 ft (12 m × 18 m) single-story wooden structure. The company produced about 50 motorcycles that year.

In 1907, William S. Harley graduated from the University of Wisdonsin-Madison with a degree in mechanical engineering. That year additional factory expansion came with a second floor and later with facings and additions of Milwaukee pale yellow ("cream") brick. With the new facilities production increased to 150 motorcycles in 1907. The company was officially incorporated that September. They also began selling their motorcycles to police departments around this time, a market that has been important to them ever since.

In 1907 William A. Davidson, brother to Arthur and Walter Davidson, quit his job as tool foreman for the Milwaukee Road railroad and joined the Motor Company.

By 1911, some 150 makes of motorcycles had already been built in the United States – although just a handful would survive the 1910s.

In 1911, an improved V-Twin model was introduced. The new engine had mechanically operated intake valves, as opposed to the "automatic" intake valves used on earlier V-Twins that opened by engine vacuum. With a displacement of 49.48 cubic inches (811 cm³), the 1911 V-Twin was smaller than earlier twins, but gave better performance. After 1913 the majority of bikes produced by Harley-Davidson would be V-Twin models.

In 1912, Harley-Davidson introduced their patented "Ful-Floteing Seat", which was suspended by a coil spring inside the seat tube.The spring tension could be adjusted to suit the rider's weight. More than 3 inches (76 mm) of travel was available. Harley-Davidson would use seats of this type until 1958.

By 1913, the yellow brick factory had been demolished and on the site a new 5-story structure had been built. Begun in 1910, the factory with its many additions would take up two blocks along Juneau Avenue and around the corner on 38th Street. Despite the competition, Harley-Davidson was already pulling ahead of Indian and would dominate motorcycle racing after 1914. Production that year swelled to 16,284 machines.

The classic Harley-Davidson engines are V-Twin Engines, with a 45° angle between the cylinders. The crankshaft has a single pin, and both pistons are connected to this pin through their connecting rods.

This 45° angle is covered under several United States Patents and is an engineering tradeoff that allows a large, high-torque engine in a relatively small space. It causes the cylinders to fire at uneven intervals and produces the choppy "potato-potato" sound so strongly linked to the Harley-Davidson brand.

To simplify the engine and reduce costs, the V-twin ignition was designed to operate with a single set of points and no distributor. This is known as a dual fire ignition system, causing both spark plugs to fire regardless of which cylinder was on its compression stroke, with the other spark plug firing on its cylinder's exhaust stroke, effectively "wasting a spark". The exhaust note is basically a throaty growling sound with some popping. The 45° design of the engine thus creates a plug firing sequencing as such: The first cylinder fires, the second (rear) cylinder fires 315° later, then there is a 405° gap until the first cylinder fires again, giving the engine its unique sound.

Harley-Davidson has used various ignition systems throughout its history – be it the early points and condenser system, (Big Twin up to 1978 and Sportsters up to 1978), magneto ignition system used on some 1958 to 1969 Sportsters, early electronic with centrifugal mechanical advance weights, (all models 1978 and a half to 1979), or the late electronic with transistorized ignition control module, more familiarly known as the black box or the brain, (all models 1980 to present).

Starting in 1995, the company introduced Electronic Fuel Injection (EFI) as an option for the 30th anniversary edition Electra Glide. EFI became standard on all Harley-Davidson motorcycles, including Sportsters, upon the introduction of the 2007 product line.

In 1991, Harley-Davidson began to participate in the Sound Quality Working Group, founded by Orfield Labs, Bruel and Kjaer, TEAC, Yamaha, Sennheiser, SMS and Cortex. This was the nation's first group to share research on psychological acoustics. Later that year, Harley-Davidson participated in a series of sound quality studies at Orfield Labs, based on recordings taken at the Talladega Sup[erspeedway, with the objective to lower the sound level for EU standards while analytically capturing the "Harley Sound". his research resulted in the bikes that were introduced in compliance with EU standards for 1998.

On February 1, 1994, the company filed a sound trademark application for the distinctive sound of the Harley-Davidson motorcycle engine: "The mark consists of the exhaust sound of applicant's motorcycles, produced by V-twin, common crankpin motorcycle engines when the goods are in use". Nine of Harley-Davidson's competitors filed comments opposing the application, arguing that cruiser-style motorcycles of various brands use a single-crankpin V-twin engine which produce a similar sound. These objections were followed by litigation. In June 2000, the company dropped efforts to federally register its trademark.

Origin: Chicago + land. Credit for placing the term in common use is generally give to Colonel Robert R. McCormck, editor and publisher of the Chicago Tribune, first using it on page 1 of the July 27, 1926 issue, although it may have been coined much earlier.

From our website, you can visit other websites by following hyperlinks to such external sites. While we strive to provide only quality links to useful and ethical websites, we have no control over the content and nature of these sites. These links to other websites do not imply a recommendation for all the content found on these sites. Site owners and content may change without notice and may occur before we have the opportunity to remove a link which may have gone ‘bad”.

Please be also aware that when you leave our website, other sites may have different privacy policies and terms which are beyond our control. Please be sure to check the Privacy Policies of these sites as well as their “Terms of Service” before engaging in any business or uploading any information.

HarleyDavidsonChicago.com is not affiliated with the Harley-Davidson Motorcycle Company.